7 Insider Tips To Driving In Japan

Driving in Japan can be a little odd at times. While there seems to be very organized and well thought out traffic laws, nobody seems to follow it. While this article primarily speaks to members of the Japanese Exchange and Teaching (JET) program, it works for anyone coming to Japan. Honestly, I wish I had been given these pieces of advice when I first came to Japan. Without further ado, let’s begin with my first piece of advice.

1. Driving On The Left 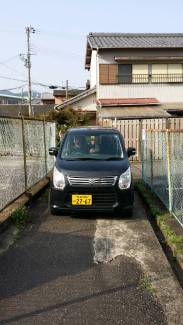 When driving in Japan, you drive on the left hand side of the road. Anybody from the United States, Canada or Caribbean will know that this feels very, very wrong. Don’t be scared, though! The driving is completely the same in every other way. You stay curb to curb, signal before crossing lanes, signal to turn and do pretty much all the same routines. Just make sure you keep to your side.

The best advice I can give you is to stay calm. I remember the first time I got behind the wheel of my Kei car ( a small box on wheels). My predecessor decided I needed to learn through trial and error…in the middle of a typhoon. Let me tell you, if I can survive winding mountain roads with 90 degree turns, zero visibility and rain falling so hard I was thrown around like a ping pong ball, you can get by too.

2. Mirrors Are Your Best Friend

Speaking of 90 degree turns, you will learn that Japan’s road system is terrible. Most buildings block any visibility and many roads are default one-way streets. Furthermore, some can be so narrow that they shouldn’t even be roads. I can’t count how many times I’ve inched my way through a “road”, playing a game of chicken with oncoming traffic, expecting to land in somebodies front lawn.

How do you deal with all of this? Mirrors. Oh no, not your car’s mirrors. I’m talking about giant circular mirrors propped up on large, vibrantly orange poles at every intersection. The Japanese know their road system is bad, but they’re not going to fix it. Instead you use these to peer into who is coming around a corner or heading your way. Again, you get used it.

One way to avoid those pesky one way roads is to get a smartphone or GPS unit and use it! Unless you are in a major city, there are pretty much no road signs to help you get around. It is virtually impossible to figure out which street is where without a GPS. What’s great, however, is that you can type in addresses in English and maps will still get you to the right location. Do not forget this tool, it’ll help you out immensely.

Eventually, you’re going to run out of gas. This is a time to relax, however, as most gas stations boast teams of people who pump your fuel, clean your windows and probably much more. Just drive into a station, tell the clerk what type of gas you want (usually regular) and how much money you’ll spend; they take care of the rest. They’ll also stop traffic for you when you need to leave. I’m not kidding, they literally wade into traffic and force everybody to stop. That is service.

Some stations, however, are self serve and do not have any support staff. While you are “inconvenienced” by getting out of the car, it does pay off by being significantly cheaper per liter of gas. Most of these stations will have English options on their touch screen monitors. If not, whip out that translator app.

5. To Pay For Parking Or Not To Pay

Parking in Japan is annoying. Almost all public parking spaces cost money and they will usually charge you based on 30 minute to 1 hour time periods. Use your best judgement here. The average cost will be about 100 yen an hour, which really isn’t too bad. However, if you go into any major cities like Osaka, Tokyo and the like, you will be looking at around 100 yen for 15 minutes with a maximum day fee of 2500 to 3000 yen. It can get expensive. As such, I recommend parking in areas outside of the big cities and training. It will be a lot less expensive.

6. Honking In The Inaka

Another habit you may need to develop is proper honking etiquette. In the US, I honked in response to negative things like if somebody cut you off or was about to hit you. In the more rural and countryside areas of Japan it is the opposite. Manners dictate that if somebody pulls over to let you pass or does anything friendly, you should respond with a light tap of your horn. Usually the other driver will respond in kind. This also works in reverse, if you pull over for somebody else, they will honk for you. I promise this will become such a habit that you’ll get offended if somebody doesn’t do this. I mean, you pulled over for them?! Where’s that honk?

Finally, let me tell you about emergency vehicles. I’m talking about ambulances, police cars, and fire trucks. I was taught to always pull over to the side of the road when one of these vehicles have their lights on. Well in Japan, they just kind of do that all the time. You won’t need to move unless they’re screaming over a megaphone into the road. This was one of the weirdest things for me to get used to because I felt like I was causing some disaster by not getting out of the way. Nope, just keep on driving and continue on your way.

I want to make sure you are efficiently prepared for your time here. Some parts of this list may freak you out a bit but don’t let it discourage you. I’m sure you’ve heard how safe Japan is by now, that works with Japanese driving, as well. Just stay calm, accept the changes and go with the flow. Soon you’ll love driving and really feel a level of freedom in the ability to go ANYWHERE you want. Trust me, driving here is a blessing because you can go to a lot of places that are not reachable by trains. Plus, you’ll be everybody’s best friend. Just make sure you get some gas money from any moochers.

Can You Dig It:

Like Loading...
Categories: JapanTags: adapt, Asia, cultural exchange, do it yourself, Driving, foreign cultures, how to, Japan, travel